History of The Palace Theatre

Fashioned after its namesake in New York City, the Palace Theatre was (and still remains) remarkably similar to its larger cousin. Established in 1914 and completed in less than a year, the theatre boasted superb construction, a stunning decor, and an interior that was cooled by fans blowing air over great blocks of ice under the stage. The Palace Theatre was considered the only first-class theatre in New Hampshire that was fireproof and “air-conditioned.” 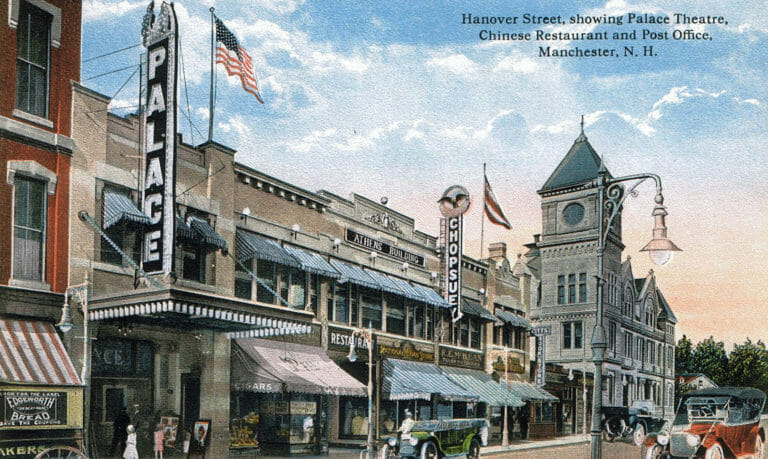 The history of the Palace Theatre begins with a Greek immigrant named Victor Charas.

At the age of 24, Victor arrived in America with little money and was unable to speak English. After working menial jobs and observing the people around him, Victor decided that his future held something better. In June of 1914, with the help of general contractor Harry Macropol and architect Leon Lempert & Son, Victor began construction on an impressive and grand theatre. Fashioned after its namesake in New York City, the Palace Theatre was (and still remains) remarkably similar to its larger cousin. Completed in less than a year, the theatre boasted superb construction, stunning decor, and an interior that was cooled by fans blowing air over great blocks of ice under the stage. The Palace Theatre was considered the only first-class theatre in New Hampshire that was fireproof and “air-conditioned.” 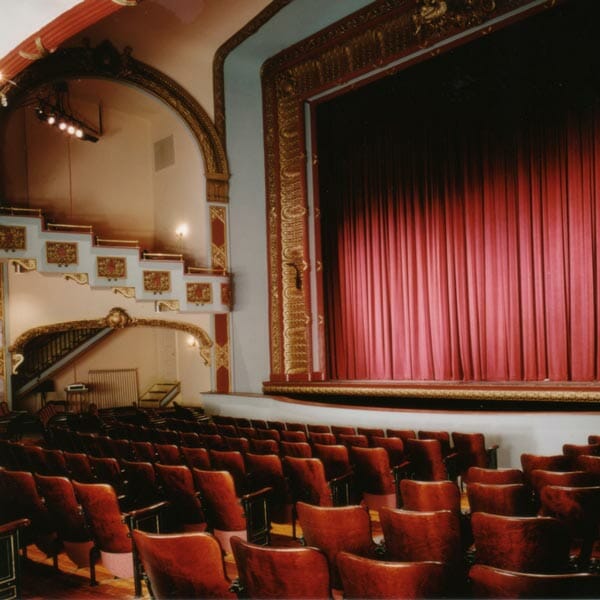 On 9th April 1915, the Palace Theatre celebrated its opening night with great fanfare.

Local press billed the evening as the grandest social occasion of the century and the musical comedy “Modern Eve” played to a full house. The lights of the Palace now joined the many other theatres in the downtown that were collectively known as “The Great White Way.” 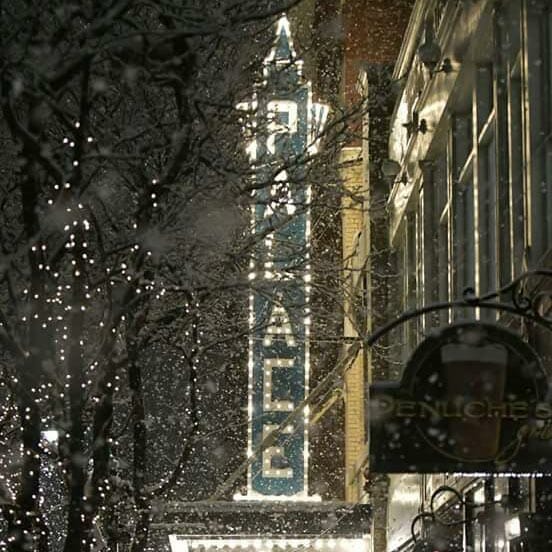 Touring vaudeville companies regularly stopped at the Palace where performers such as Jimmy Durante, Bob Hope, Harry Houdini, The Marx Brothers, and Red Skelton entertained audiences. In addition, stock companies presented up to 12 performances a week. In 1928, a patron could see the resident company, “The Palace Players” for just 75 cents! 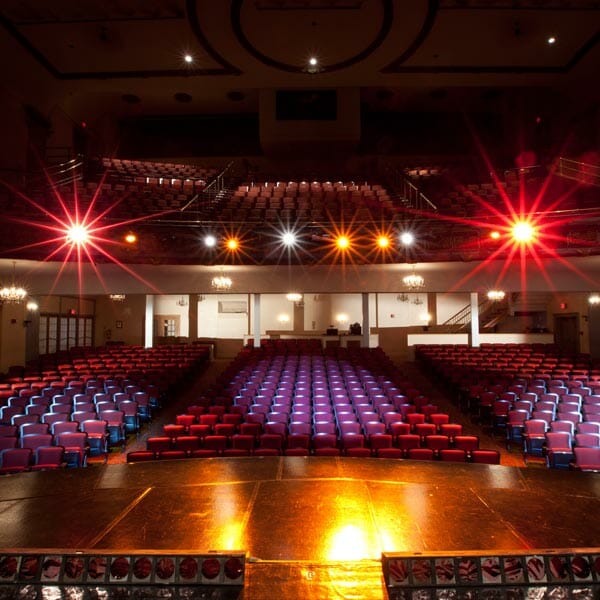 Changing with the Times

As time moved on, the nature of entertainment changed and so did the Palace.

The advent of silent pictures in the 1920’s, and later “talkies,” pushed vaudeville out of public favor and replaced it with the movies. The Palace adapted and became primarily a movie house from 1930 until the early 1960s. At one point it was even functioning as an X-rated theatre- shhh not our finest moment! 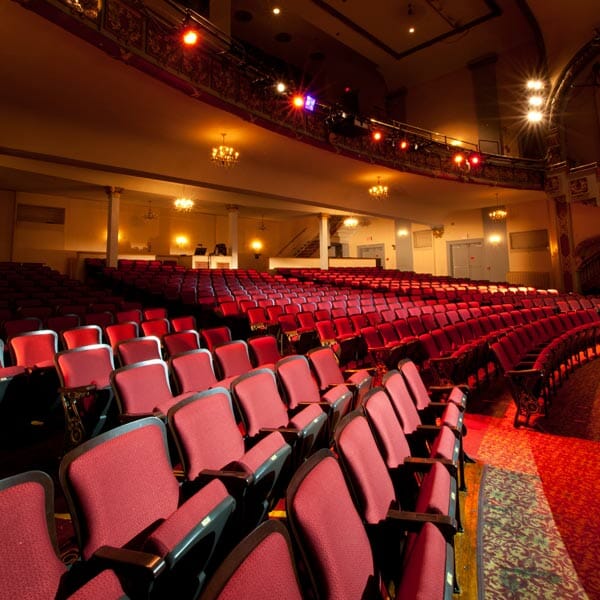 The Arts Are Gone

By the late 1960’s the Palace Theatre no longer had any connection to its artistic beginnings.

It was now being used as classroom space for New Hampshire College. When the school moved to their new campus, the Palace became surplus and fell into disrepair. The seats were removed, the stage equipment was left to deteriorate and the building was used as a warehouse. 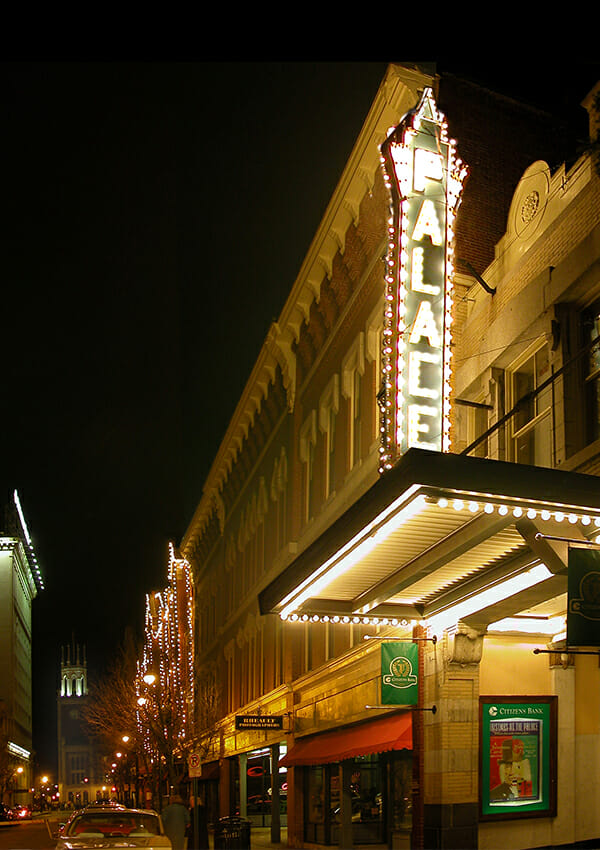 It appeared that the Palace’s theatrical days were over, but in 1974 the Palace was given a second chance to shine.

Prominent Manchester lawyer John McLane and Mayor Sylvio S. Dupuis spearheaded a campaign to restore the Palace to its original glory. With financial assistance from the Norwin S. and Elizabeth N. Bean Foundation, the Palace was awarded an opportunity to again become a cultural fixture in the city. Structural and aesthetic renovations were made, new orchestra seating was installed, and on November 2, 1974, the Palace Theatre once again celebrated opening night. 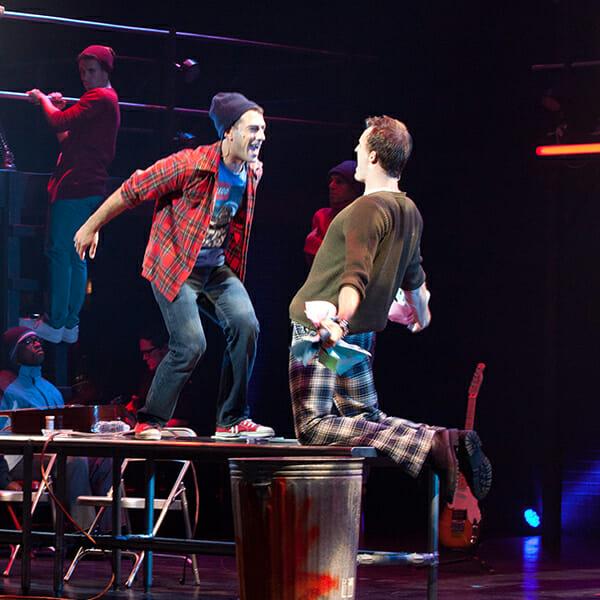 Since that time the Palace Theatre has withstood fire and flood.

In December of 1980, a pipe burst sending 70,000 gallons of water pouring down the balcony, over the rail, and into the theatre. In 1984, a fire on Hanover Street ravaged much of the block. The firewall of the Palace Theatre was credited for halting the blaze and saving the rest of the structures. 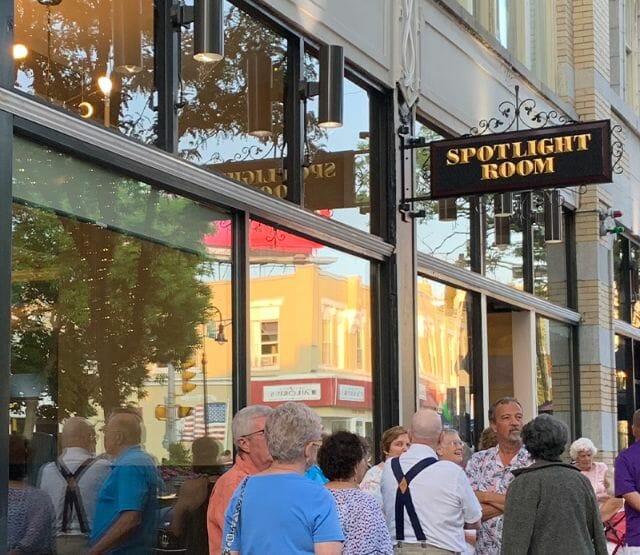 Forever Emma Studios and The Spotlight Room opened their doors in 2018. 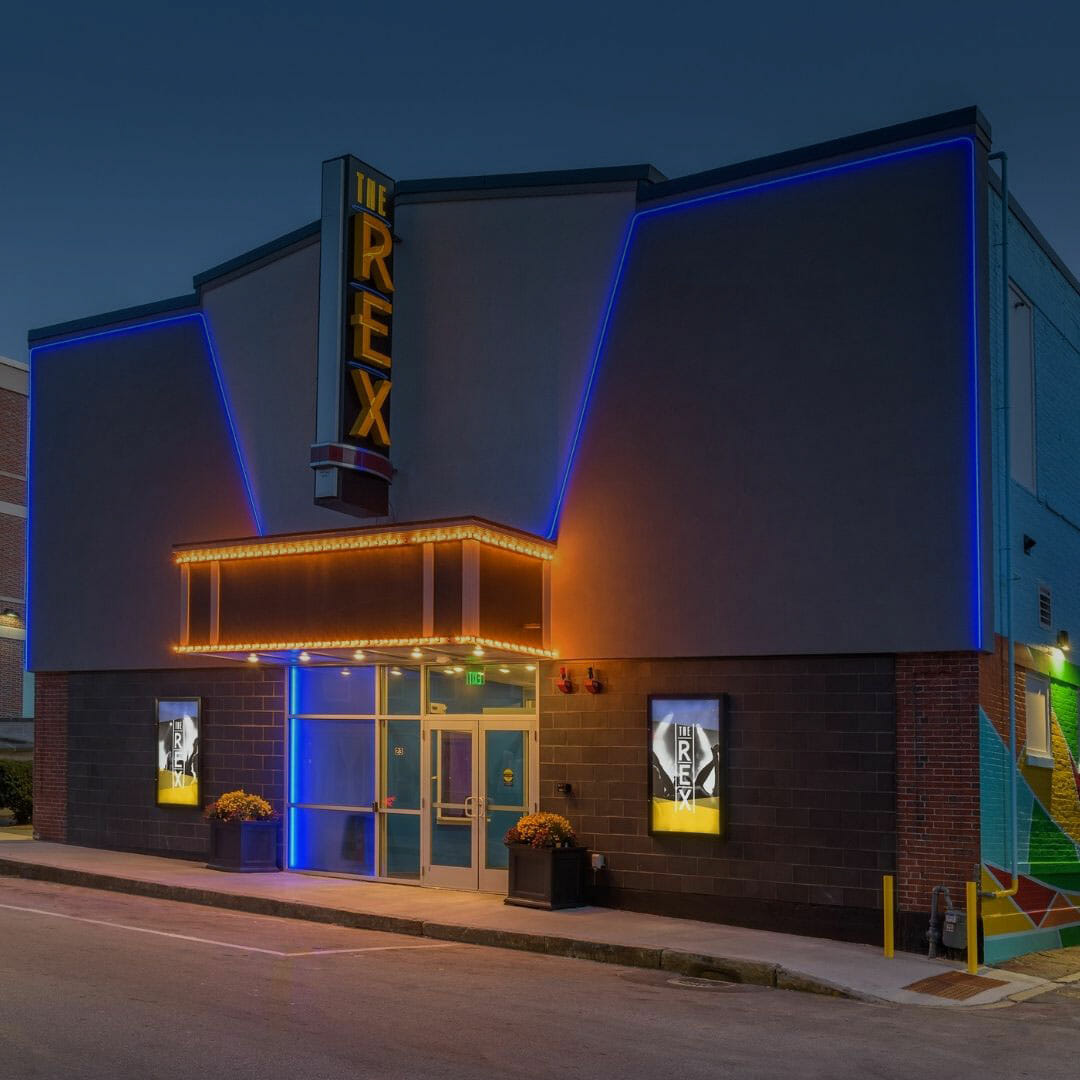 In 2019, The Palace Theatres added a fourth venue: The Rex Theatre.

This versatile 300-seat venue, located one block behind the Palace, is an extraordinary space, perfect for concerts, comedy shows, community events, and theatre. Originally a printing press, The Rex has undergone a number of transformations over its 90-year lifespan. 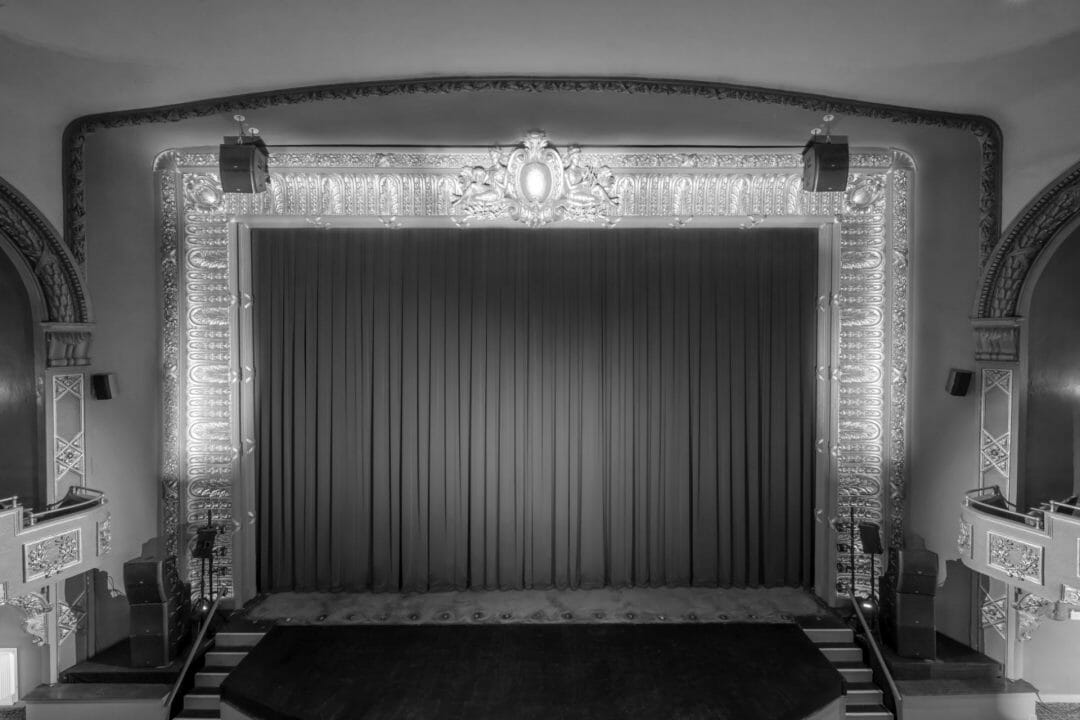 The year our stages went dark.

When Covid-19 struck in March 2020, the Palace Theatres canceled all upcoming events and closed all venues to the public in order to ensure the health and safety of its patrons and staff. Along with the rest of the performing arts industry around the world, our stages went dark, but the Palace Theatres remained positive and persevered through the uncertainty surrounding the pandemic. In June of 2021, following off-and-on closures the Palace reopened its doors to the public while adhering to Covid safety protocols. 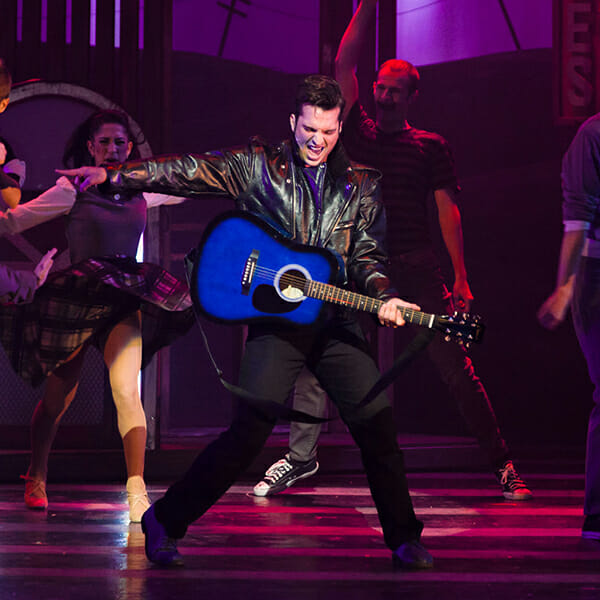 In an area that once had 22 theatres, this historic building is now the sole survivor of “The Great White Way.” As the Palace’s history continues to unfold, the theatre is again a center of cultural activity and Victor Charas’ vision remains alive and well.